Family is important. Oftentimes people focus on the role of fathers in the lives of their sons. What benefits will an active, attentive father provide in the life of his daughter? This is not to demean the influence of mothers nor overlook the needs of sons. But consider the deep and weighty effect that fathers have on the lives of their daughters; for good or bad. Girls with attentive fathers do better academically. They are likely to achieve higher grades in school than girls with absent fathers. Active fathers encourage their daughters to stay more years in study and seek higher education achievements. A father who is present and attentive assists his daughter to have better social and communication skills. These skills are enhanced by a father who takes an interest in his daughter’s interests and encourages her to express her viewpoint. Fathers also play an important role in developing religious behavior.

Being a father is a unique role. Although the male figure is often associated with male successors, in a family it is undeniably obvious that daughters look up to a father figure.

What a future husband is to a woman, the father had greatly influenced the daughter even at a young age. Even after marriage, a father’s advice is truly essential. A family, intact or separated is undeniably in need of a responsible father figure.

Kudos to all fathers these coming Fathers Day 2021. Continue being an inspiration to both your sons and daughters.

This month we honor our Fathers who are working hard to be good role models for their children. Unless you have children, you have no…

The break-up, re-marriage, and adjustments can be very hard for the children because they are caught in the middle, love for the father and love… 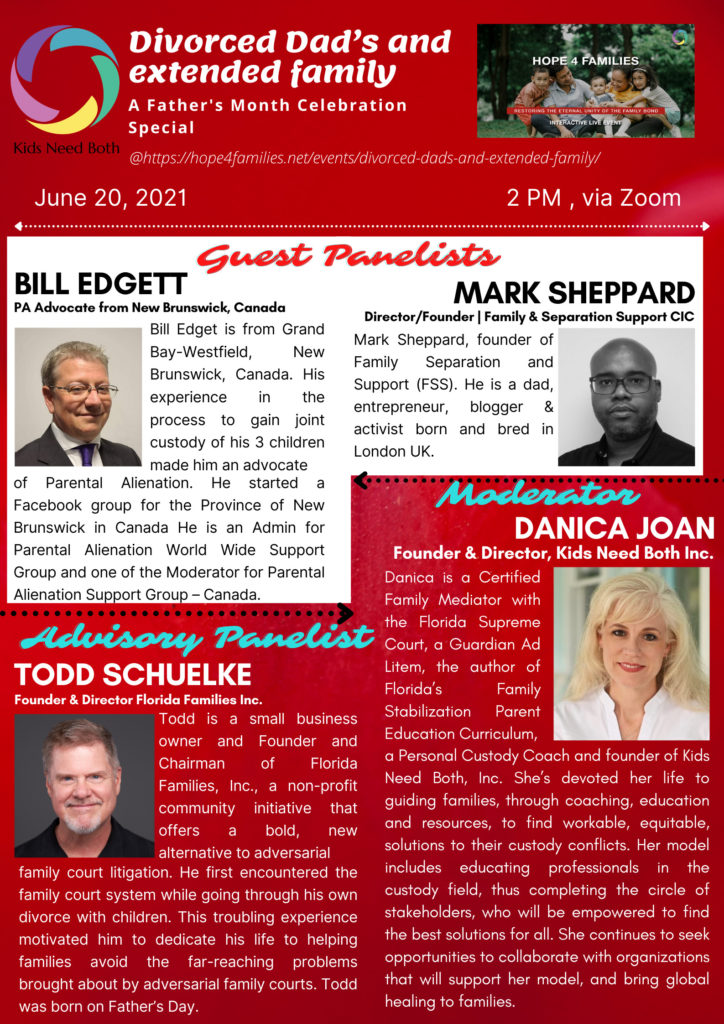 By Cheryl P. Salvan The recently concluded event for the month of May, “Being Mom Without Children at Home – May Panel Discussion” was a…

“Dear Mom & Dad” was written by Monica Epperson, founder of The Child of Divorce. Monica experienced five divorces during her childhood and started The…